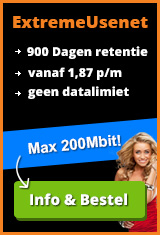 We have been working for months to upgrade the SABnzbd code from Python 2 to Python 3.
Although it might not sound like a big change, we had to rewrite almost every part of
the code. We also included a number of new features, listed below.

Big changes in 3.0.0
- Python 3.5 and above are the only supported versions of Python.
- Cache handling is greatly improved, resulting in more stable speeds on some systems.
- Articles failing with CRC errors are now retried on other servers.
- SFV files, even obfuscated, will be used for renaming when there are no par2 files.
- Fully obfuscated RAR-sets with no verification files are detected and extracted.
- Built-in internet bandwidth test.
- Windows Service support was changed. The service will need to be reinstalled!
- The Windows installer is 64-bit only, for 32-bit please use the standalone package.

Other changes since 2.3.9
- Files inside an NZB that are fully identical are now skipped automatically.
- Folders of jobs that failed post-processing are renamed to `_FAILED_`.
- Blocking of unwanted extensions that are directly inside an NZB.
- In Python 3 OpenSSL 1.1.1 is used for Windows and macOS, as a result
newsservers manually set to `RC4-MD5` cipher can no longer connect.
- TLS1.3 support for newsserver connections.
- SABYenc, par2 and unrar are now required to start downloading.
- Growl-support was removed.
- The `smpl` skin was removed.
- Using the API with `output=text` to add NZB's will report the `nzo_ids` instead of `ok`.
- Queue-item labels are no longer part of the name but separated in API-property `labels`.
- API-calls `tapi` and `qstatus` were removed.
- On Windows only Multipar is available for repair.
- Linux tray icon support was improved.
- On Linux special permission bits are removed from files after download.
- macOS features such as the menu and notifications now use native code.

Bugfixes since 2.3.9
- Resolved potential security issue in FAT-filesystem check and Nice and IONice Parameters.
- Sample removal did not work if only 1 sample file was present.
- Crash on badly formatted RSS-feeds or readout during editing.
- Only really run pre-queue-script when it is set.
- Always report API `paused` status as a boolean.
- Automatic aborting of jobs that can't be completed would sometimes not trigger.
- Windows systems could enter standby state during downloading.
- Some errors thrown by unrar were not caught.
- Files and sockets were not always closed correctly.
- Unwanted extension check was overly aggressively deleting folders

Upgrade notices
- When upgrading from 2.x.x or older the queue will be converted. Job order,
settings and data will be preserved, but if you decide to go back to 2.x.x
your queue cannot be downgraded again. But you can restore the jobs by going
to the Status page and running Queue Repair.